So Here’s OTS interview of local based Duo Arkane, who’s been making waves in the Birmingham’s underground scene since they joined forces. Enjoy ……

Q1, OTS , Arkane aka Tom and Arron, Tell me what and when made you get into DJ’ing and why Tech-house? I know you have made Drum & Bass tracks so why tech-house?

Arron:- Hi OTS , personally, I’ve always wanted to DJ. I wanted that CD player from Argos that had 2 CD drives & 2 faders. Unfortunately I wasn’t fortunate enough to get it because I had issues playing music loudly.  My parents use to go mad. Then I met my fiancé & she financed a Pioneer XDJ-RX. That’s where it all started for me 3 years ago…. I never knew about ‘Tech-House’ but i used to hear Annie Mac playing it on Radio 1 Friday nights. It took me months to find the genre & what it was called. I just knew it was some variation of ‘House Music’. I used to love Jackin House & Bass house but the rhythmic stuff. Denny Low frequency is still my favourite track. If you’ve been to our sets you’ve most likely heard it.

Tom:- I started producing music back  in 2010 on fruity loops, Started with Dubstep & then went into hip-hop & was doing that until probably 2014, I just loved making beats but, as i started going out more & started to broaden my horizons music wise i fell in love with House Music. Listening to people like PeteGraham & Tom Shorterz at 1031 & 231s just made me wanna start making them sort of tracks. So that’s what i did, well tried to do anyway. Probably 2 years after that i remember watching Dusky at rainbow & thinking ‘wow’ i wanna be able to do this to a crowd of people, so i got myself some CDJ 800s & an old Numark mixer & made some CDs up & it went from there really. 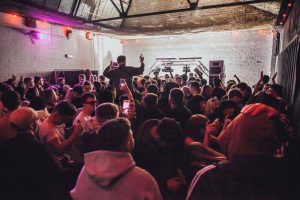 Q2, OTS, Knowing you two on a personal level, I know you two get on massively and respect each other completely, but are there times where you disagree on the ways Arkane is heading or you both thinking with the same mind set?

Arron:-  Yes we both get on very well. We’re both proper laid back & are go with the flow kind of guys. We both agreed when we first started we would put so much effort in but we basically worn ourselves out, Seeking & playing gigs , 2 radio shows , plus producing,plus events , plus working full time jobs, we decided to a step back to calm down abit . So we have decided to finish the duration of the radio shows & focus on gigs & producing. I’ve made the change from Logic to Ableton , so learning that is taking sometime but its coming on now ! Personally i love the way things are going. I feel everytime we play together we bring a special vibe. I love seeing the smiles on people’s faces when we play.

Tom:- Yes. Like Arron said … we’re both proper laid back & chilled out & get on really well !!. We did put so much effort in within the first few months it became to much with jugging DJ’ing, Producing, working full time. Everything we was doing was to do with promos & there wasn’t enough hours in the day. We both agreed that we needed to take a step back & take it slowly especially for our production too. We’re both trying to get our sound grounded & ready to release now so we make a proper impact rather than little bits here and there. 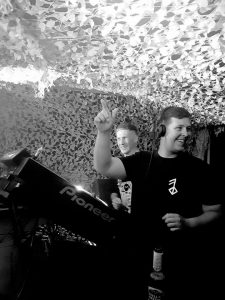 Q3, OTS:- Now you have played at some of Birmingham’s biggest underground tech brands like Afta-Dark , VOID, District and The Acid Experiment, Where do you see yourself next.

Arron:- Right now we’re just making music & finding gigs. We are lucky to be residents at our favourite party District. We actually was formed by this brand. We was put on a B2B never meeting before so its good to the see the party going from strength to strength. Our favourite set was probably the last on the 19th May 2018. Taking over Lab 11s main room, the room was full and the vibe was fantastic.it was sick to see the smiles on Dan & Jords (BAD BATCH) faces towards the end of the night. We can’t wait to see how the next one turns out on the 7th september. Tickets are flying out with headliners Marc Spence and George Marshman. 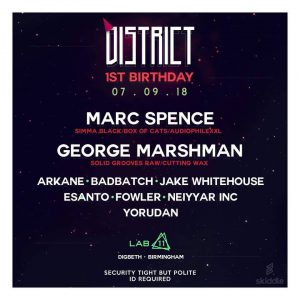 Tom:- Yes, Exactly that, At the moment we’re just making music, sitting on tracks & kind of going with the flow. I think we’d both love to play a festival & love to play abroad but at the minute we’re concentrating on the music right now.

Q4, OTS:- Yes!! I agree with you making more music because one thing Arkane bring to the table is producing skills with tracks being signed to Open House Records & Pushing Trolleys you bring your own tracks that no one has heard before to your sets, What are your plans with your producing and how are you going to push forward in a genre that is ever growing in popularity?

Arron:- Haha Thanks. We’ve decided to just hold onto stuff for now. Like we said everything was a rush & we’re still learning has we go! We do a have a free EP on the way entitled ‘No Rules’ When this is out we don’t know but its’s not too long away!.

Tom:- Yeah, We have no rules no the way no release date yet but not long & we also have a track being released on East Project, This is a remix of a track already signed to East Project so that’ll be a nice release! Like Arron said though, we’re looking to sit on our tunes right until we’ve got an arsenal to drop!!

Here’s a little mini mix to get a taste of what Arkane is all about.

Q5, OTS:- As you both know, tech-house has become massive over the last past few years with the likes of Solardo, Fisher, Detlef and Camelphat becoming the faces of tech-house by bringing it to the masses.  Who is your inspiration on the scene and why?.

Arron:- Ahhhh, there’s so many to choose from!! Dom Dolla has just released a track called Take it. These vibes really really get me going mad! Dirty bass, Simple hats, & A sick vocal. it has influences from bass & tech house which is my perfect mixture. We don’t release these types  of tracks ourselves, But we defiantly plan on doing so.

Tom:- That’s a tough question because i don’t think I’ve got room for them all, But Archie Hamilton & Enzo Siragusa are in these for me, along with Mason Collective, Micheal Bibi, Pawsa, Bassel Darwish, Klanguentler & loaaaddds more!

Q6, OTS:-  With the rave scene being in uproar in Birmingham over the last year due to the infamous Rainbow Warehouse closing its doors due to circumstances totally out of their control.  Do you think Birmingham will or has another venue with the same kind of spirited essence & vibe that place created? Because I know something i miss that place dearly, as many do.

Arron:- Ahhhh yeah, we have to give a massive hats off to our scene in Birmingham. The scene is thriving  & its still growingi !! Rainbow was so special to me, I remember it being the best night out you’d ever had, 1031 & 0231 were the ones for me. It’s where i was introduced to Chris Lorenzo , Tom Shorterz , Hannah Wants & Dj Zinc. My favourite to date was Made Festival , Chase & Status 2015. The set was something else, I do like my Drum and Bass so High Contrast as-well. They’ve been at the rainbow a number of times.

Tom:- Rainbow is what brought me to the rave, it was my first rave i’d ever been too & all i know is it changed my life. Without that place I probably wouldn’t have started DJ’ing or maybe even listening to house, but as for another venue I’d have to say Lab 11 is Birmingham’s closest thing to rainbow now. I think even whilst Rainbow was open Lab was always a sick vibe, that terrace is special when you’ve got any DJ on in there not to mention when you get people like Claude Von Stroke playing there. 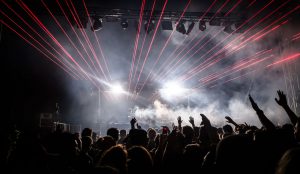 Q7,OTS;- Finally, What’s your favourite track or album at this current time.

Arron:- Mine is Dom Dolla – Take it,  But my ultimate favourite track is Hot Natured – Benediction

Tom:- That’s an even harder question, i’d have to say Mason Collective- Buss it

Thanks for taking the time for our interview.