Sónar turns 25 in 2018 and how else would they celebrate this milestone other than to transmit music in to space!

The music will be directored at GJ 237b which is a planet orbiting a star thats 2.4 light-years from Earth.

Sónar Calling GJ 237b is billed as the first-ever attempt to communicate with a potentially habitable exoplanet. GJ 237b, also known as Luyten’s Star b, was chosen because of the possibility of receiving an answer back on Earth in 25 years, clever eh? The key parts of the project are two series of transmissions sent from the European Incoherent Scatter Scientific Association (EISCAT) antenna facilities near Tromsø, Norway: the first was completed last month, and the second is scheduled for April of next year. The festival itself, with this project as a core theme, will run from June 14th through the 16th.

There are 33 artists contributing specially-composed pieces of music to Sónar Calling GJ 237b, including Autechre, Carsten Nicolai (AKA Alva Noto), Nina Kraviz, Kerri Chandler, Matmos, Laurent Garnier, Fatima Al Qadiri, Soichi Terada and Kate Tempest. Sónar is also calling for participation from the public, and at least three user-submitted pieces will be added to the April broadcast.

Learn more at the Sónar Calling GJ 237b website.

The first names for Sónar Festival 2018 will be announced at a later date. 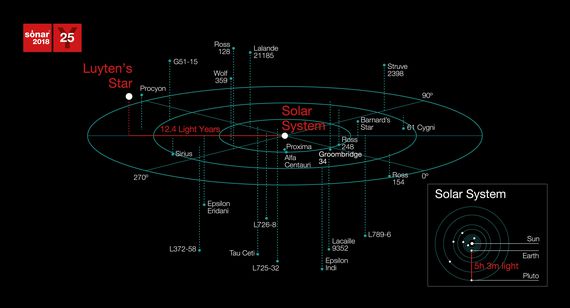