China is famous for it’s counterfeit wares, everything from Clothing to Computers….and now it would seem Clubs!

A Knock-off Fabric has been discovered in Beibin Lu area of downtown Chongqing and even has a logo identical to the famous London club! It was spotted by Dutch DJ and promoter Bram van Ravenhorst, aka Blind ‘92, who runs the Echo Bay club in Chongqing and snapped two images.

Apparently the similarities to the revered London club end with the Logo and name, the music policy focuses on EDM and commercial house. 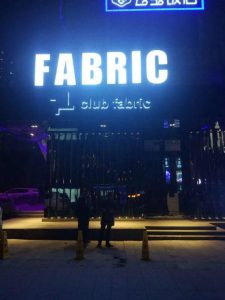 TimeOut Shanghai dismissively notes: “If you’re going to use the name of one of the world’s most successful clubbing destinations, Fabric, then you better do a good job. Instead, this is yet another Chinese-style club with everything that comes with that.”