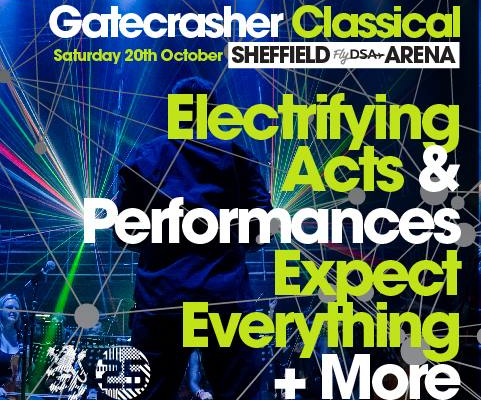 Following the success of their two previous Classical events Gatecrasher have announced that on Saturday 20th October they’ll be taking over Sheffield’s FlyDSA Arena to kick start the monumental 25th birthday celebrations with their huge Gatecrasher Classical event, celebrating a quarter of a century of a global brand that defined a generation as you’ve never heard before.

As a world conquering global brand, which became infamous in the days of the Republic nightclub in Sheffield, Gatecrasher‘s 25 year history has witnessed countless unforgettable experiences which have become emblazoned in the hearts & souls of clubbers worldwide. From the Millennium Don Valley NYE event, the NEC arena shows, Tiesto at Nottingham ICE Arena, the 14th birthday Magna and Gatecrasher‘s 20th birthday event at Donnington park. The ambitious 25th birthday event, set at Sheffield’s very own FlyDSA Arena, will see Gatecrasher breaking with tradition; hosting the brand new Classical event featuring some of the biggest dance tracks as you have never heard before, and creating new history; delivering a Gatecrasher arena show, never witnessed before.

Bigger, Better, Bass boosted business is on the agenda for the 25th birthday, with the scale of the impressive new venue seeing Gatecrasherpush the boundaries in terms of production. Expect Spectacular & More! Full show details have yet to be announced but Gatecrasher are planning to make the new classical show, which have already become some of the most revered experiences in Gatecrasher history, even bigger whilst retaining the feel and atmosphere of the previous sell out events. Plans involve a more diverse and larger 50 piece Gatecrasher Orchestra playing with the backdrop 30 piece choir performing some of the biggest dance tracks as you’ve never heard them before. As part of their 25th birthday celebrations, you’ll be guaranteed Gatecrasher will be pulling out all the stops, for what will be an un-missable unique celebration of dance music culture.

Full show announcements will be announced very soon. Sign up now to be the first to find out and gain access to discounted pre sale tickets.

Due to the success and demand if the previous Classical events, we urge customers to sign up for the best possible chance of securing tickets.