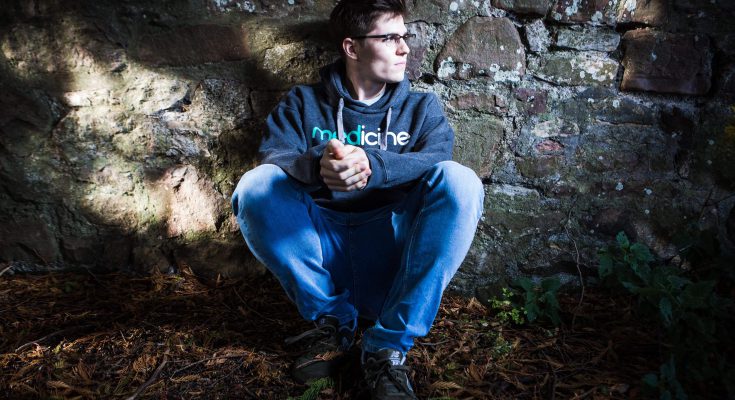 “My audience is engaged in everything I’m doing. I’m constantly involving them in the process so they understand the story. In this day and age, the genuine personality behind the music is everything that people look for in music.”

Like many artists, 24-year-old Drum and Bass Producer/DJ, William Keeno Keen are finding their audiences changing over the years by expecting to be challenged when taking them from point A to point B. “I try to introduce as much diversity and challenge them as much as I can,” said Will. “The audience vibe I get is quite different to the vibe I see when my peers are on stage. It’s no longer about people losing their minds and going nuts. The consumption of the music is more about storytelling.”

A musical story that began with Will at an early age. Raised in Basingstoke, England he attended a school with one of the best music departments in the world. In following his brother’s footsteps, Will joined choir school up until age 13 where he was required to learn two instruments. He chose the clarinet and piano.

“The clarinet is one of those instruments that teaches you breath control and it gives an insight on how other instruments within an orchestra work,” explained Will. “When I’m writing music now I actually think to myself ‘can someone actually play this? Is it possible to hold the note for 25 seconds?’ These questions automatically pop into my head so that when I come to perform them in the future, the problem is already solved.”

“Which problem,” you ask? More on this later.

Will then attended secondary school on a music scholarship where he went on to tour with the choir singing Barber Shop, Hymnals and even ventured into Rock music by singing in local bands. “I just had fun experimenting when I was young and was lucky to have the time and space to do that.”

“When I decided to become a Drum and Bass producer, which didn’t come consciously, rather naturally because I already had all the tools to do what I wanted to do,” recalls Will. Working with Hospital Records since 2012, he signed exclusively to Med School, a sister label of Hospital at the beginning of 2014.

Initially, Will produced one-off compilation pieces which turned into a contract for a 6 song EP for Med School as an experiment to see whether he wanted to produce full time. The EP’s title track, Nocturne, became an instant smash on the DnB scene in early 2014 with its refreshing, melodic sound and catapulted Will to sign a one-album deal with Med School with the option for two more.

After his 2017 release, All The Shimmering Things where the opening title track features recorded sound of birds from the very same Nightingale Valley Park where our conversation took place, Will is set to release his fourth studio LP “sometime in 2019″ and has very strong opinions on the artistic integrity of some artist’s implementation of templates in their productions without giving credit in their production rights.

“With templates, they are a corner cutting way to where you want to go,” Will unabashedly said. “The templates should exist in your head already. If you’re trying to create something specific that has a certain structure and a flow, the other music of that style should be enough to inspire you. You shouldn’t have to directly lift from something else and import it into your project. Unless you’re at the stage where you’re learning and not planning on commercially releasing the tunes, pre-existing templates shouldn’t be used.”

Ghost producers, on the other hand, is a touchy subject according to Will. “Some don’t want to be credited. Some can’t be credited because the record label of the artist the ghost producer is writing for won’t allow it and third, others who sell their music for the willing is a way of life, much like the producing of templates.” Will continued, “You can’t tell people how to spend their money, but from my perspective, it’s easy to tell when someone’s heart isn’t in their productions.”

As Will’s Keeno career continues to progress, it is important for he and his girlfriend to confront the next chapter of their lives full steam ahead. Currently living in a Bristol, England apartment, he has everything he needs but feels a bit constricted in the fact that there’s little room for growth.

With landlord remodel constrictions and limited outdoor space, Will’s taken to his new hobby of mountain biking and his insatiable need of learning how things work by disassembling and reassembling his bike. Enjoying the freedom of cycling is two-fold for Will, “It keeps my mind stimulated so I can continue to write beautiful music.” And what he has in mind might just set him over the top aside from being a talented record producer and DJ and solve a few problems with the current stagnant  elements of performing live.

Festivals are a unique stage for an artist to showcase their talents, whatever they may be. And in this day and age of prerecorded music with one lone person entertaining tens and sometimes hundreds of thousands of fans, it genuinely makes you wonder, “Is this it? There has to be more.”

With advanced technology the art of mixing tunes into other tunes is now second nature to artists, it’s not challenging anymore. Will’s aim is to create a piano-like device to produce music in front of fans with live piano, bass, drums, etc. Heritage Orchestra now tours with Eric Prydz and Goldie and employ two drummers who alternate tracks because of the exhaustive BPM. “I think it’s an interesting concept,” said Will. “With my schooling background I think it would be neat to add something special to my performances.”

The difficulty though is the venues. “The places that I choose to perform will be limited. If I take it to a concert hall, it’s going to be an uphill battle because of the acoustics, but I now look to be a performer in a more instrumental type of way.”

It is this improvisation that inspires Will to continue his journey and is in an excellent position with Med School. They allow Will the freedom to do what he does and feels will be best for Keeno. Once he sorts everything out in the coming “months and months,” Med School will be there to stand by him during this next endeavor. “We as artists have an incredible platform to do what we want to do now and we just need to expand on it to create more,” Will exclaimed.

Will hasn’t been to America since his school choir touring days and wants to change that as well. His successful live Bristol Mix Sessions, which air the third Wednesday of each month, are on his radar to perhaps start a once a month jaunt to a different U.S. city. By inviting guests to the show and providing a unique opportunity to meet and network with American promoters and fans, Will hopes to expand his brand into the lower 48 market.

The longterm goal of all of this is to remind fans that Will is a person, too who has issues and wants to communicate them in every way possible. “Maybe I can influence someone to start writing tunes,” Will emotionally said. For a man who enjoys his solitude, William Keen yearns to keep the passion he has for his music and keep his fans as everchanging and challenged as possible.