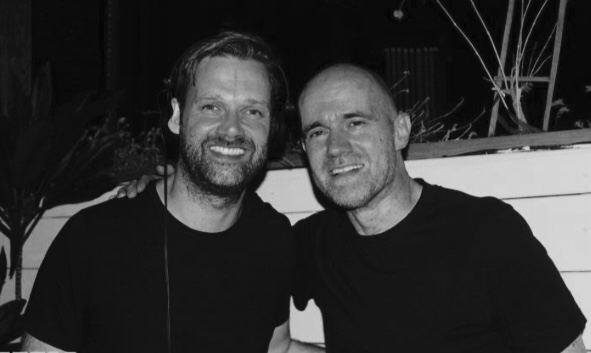 Paul Thomas and John 00 Fleming are creating hard-hitting waves bringing Progressive Trance back to the forefront of dance music.

In the late 1990’s and early 2000’s, the Trance world was full of artists fighting for the scene. Initially, Progressive House and Trance were hijacked by EDM and Beatport during the EDM explosion making it cool. Soon after the explosion, the media called EDM uncool leaving the big names of Trance that went chasing the EDM dream in a bit of a quandary.

But today, even with a saturated market, there is still room for Trance enthusiasts to participate in a fresh and exciting wave of music with roots that have been with us since the beginning.

Paul Thomas and John Fleming are two highly respected members of the dance music industry with over 50 combined years of experience and their movement to rebirth Progressive Trance is more than just a passion, it’s literally a way of life with Paul recalling that “there was a span of five or so years where I was unsure what I was going to do. It was difficult to find music that I called Progressive because the whole genre got bastardized by the EDM explosion and people forgot what Progressive music was in the late 90’s and early 2000’s – I refused to go down that whole EDM route.”

John has viewed the marketing aspect of artists going as far as labeling their own music as a genre just to be booked by promoters and that their music is more easily searchable on the skewed music purchasing site, Beatport describing in grave detail that “You have artists that have made an empire for themselves and are at the top of their game and who are now in danger of not moving forward and losing their mainstage festival spots because they play Trance. The more they scream that their music is Trance the more underground Progressive Trance artists such as myself and them are being pushed out. So what do they do? They create a real mess by releasing music under Progressive House while still having Trance elements in their music.”

When artists play this genre label slapping game not only are they derailing the definition of Trance, they’re taking away the musical education process for young artists. “It’s a difficult conversation to have,” John worryingly said. “I tread lightly when I say this but the years that I have spent in the Trance scene, that anymore, Trance is a four-letter word. I can shout as loud as I can that I’m passionate about (the underground vocal and progressive side of) Trance and it falls on deaf ears to this new generation.”
“Therefore,” John continued, “they haven’t been educated that they haven’t been taken to Trance and then I get yelled at that I don’t play Trance so you have to slap a label on what I do. That’s why we’re stuck with genres. The term Progressive Trance has been thrown around a lot at the moment and that gives a clear indication that it’s not Trance – it’s Progressive Trance – then it begins to have a sound of its own.”

So, why not just blanket all of this music together? Well, again, Beatport is partially to blame because artists like John and Paul who are releasing deeper textured Trance are never going to sift through Armin vanBuuren or Above and Beyond records because that’s not where artists like them believe their music fits.

Even playing live sets have become increasingly difficult for artists like John who enjoy playing Techno and the new Deep Melodic Techno that people are calling Melodic House and Deep House but describes to a point where you can still get away with it in the music that he and artists like him play saying, “People who are into what we now call Progressive House are also into Techno and Deep House and you can lump all that music together now but it doesn’t fit that whole label of Trance or vice versa and Beatport will label it as the other so the track won’t get lost in the shuffle.”
Having lived through those early days, John describes that “Techno embraced Progressive Trance because it was a big lift moment during their set, then they went deep again. You could do that but now with the main room EDM people it’s too disconnected – they’ve more in common with each other like the Steve Aoki‘s of the world. We’ve got more in common with history repeating itself with the Techno and Progressive Trance because it has more of a musical moment but with quality control that prevents it from straying over that line.

But that’s what Progressive Trance always did, it liked to have a bit of fun but we worked damn hard to make sure it wasn’t obvious in your face of the mainstream. That’s where the skill and care come into it. You have to really think hard, ‘How can I make this moment but not obvious like it’s a paint by numbers scheme where it’s a big build and a big drop and so on?'”

This is where the two business models of the industry come into play. The first is the commercial mainstream which lends itself to the Billboard Top 40 employing producers to engineer a track based on the midranges for suitable listening on the radio, small portable devices and festival speakers (which aren’t the best in the world) providing a glossy world for promoters. The second is the design of a track for a low drive and an underground dance floor with a quality speaker design such as London’s Ministry of Sound.
But we’re starting to see a movement that takes away from the craze of social media propelling people calling themselves artists without a lick of experience or knowhow of what a genre of music is supposed to sound like and Paul’s opinion is that these type of artists wouldn’t even scratch the surface with the type of underground music that he and artists like him have passionately designed for decades, and that’s just fine with him.

“You’ve seen it America even in the last five years with the Bubblegum Pop and the Sweedish invasion being replaced by more skillful and intelligent producers that, in turn, bring a more educated crowd to the dance floor,” Paul unabashedly said.

Paul finds too, that the young talent in the Progressive world is starting to fall in line and the new music he’s finding for his weekly radio showcould easily be showcased twice or three times weekly. John agrees with this assessment saying, “The music is more organic and that’s what identifies a high-quality track and a damn good producer.”

Paul continued, “These artists aren’t making it (music) to fit into the EDM or Trance scene. They’re not making it appease a record label to have a number 1 single or keep people at the bottle tables happy during a show. People in Progressive Trance don’t give a shit about that, they’re making it because they love it and you (other artists) find and hear it as well and begin to play it.”

Paul cites Stereo Underground, a new artist signed to the FSOE UVlabel where he is the Director of A&R saying, “He makes music that’s inside of him not worrying about a number 1 track. Again, it’s going back to what was truly done in the initial underground boom of the late 90’s and that in itself was popular. You’re starting to see a resurgence where everyone is making their own way by thinking outside the box. Again, it comes full circle.”

The question begs, though, of whether this Progressive Trance movement can stand on its own without the first generation of Trance being left behind. Paul answers that by saying that numerous Trance fans are moving in the Progressive direction but it’s hard to completely move away from Trance because of the deep affiliation people still have with it saying, “We’re making fresh, forward-thinking melodic tunes that have a lot of those same elements that were in tunes 20 years ago.”

Paul stated he has communicated with two very respected, well-known DJ’s voicing their displeasure with the Trance scene as it stands with one going as far as saying they are “fed up” with the scene and looks to join the Progressive movement.

“And it’s not just the artists,” according to Paul. “Fans young and old, even the traditional 138 have been emotionally affected by this movement actually thanking John and me for the injection of this specialized branding, the more critical side of Trance being produced, saying that they’re enjoying Trance again, or now, as the age may be – it’s more real for them.”

John again eyes this movement during live performances describing how the art of DJing is aiding again in storytelling and replacing the quickly tiresome theatrics of bangers that cater to remedial attention spans. “The club-goers are there for the experience – suddenly looking down at their watch realizing that three hours have passed. It’s bringing back what made people originally have those energy shifts allowing them to literally go into a trance with their heads down. The early days are coming back – they are back – it’s there again!”

John emotionally stated, “This underground wing of Trance is the movement that Paul and I are trying to embrace again and we’re inviting the Progressive House and the Melodic Techno artists who are rejected by Techno labels to use the strategy Oliver Lieb implemented years ago and the current ones that Kamilo Sanclemente, Bluum, and The Stupid Experts are when those labels tell them their track is a little more Trancey than they expected to send it to us because we’re like kids in a candy store again!