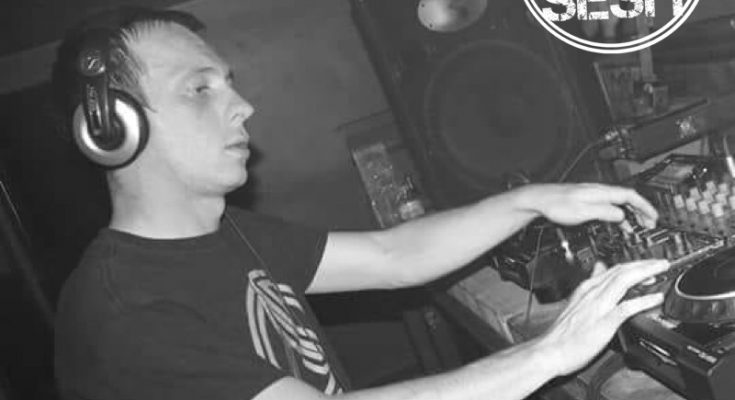 First and foremost, welcome to famous ON THE SESH hot seat!

Tell us about Rich Miller… (where are you from, how old are you, hobbies, family etc)

Hiya sesh heads!I’m 31, I’m from West Bromwich which is near Birmingham if you don’t know.

I’ve a gorgeous fiancée named Kate, Kids, Dog, Rats, Rabbit, Sea monkeys, squirrels you name it, we’ve either got it or had one. I’m an engineer by trade, I enjoy cycling, fast cars, good tunes and footie!

You’ve been on the scene for quite some time now, how did you get into DJ’ing and when was it?

I started to learn to mix when I was 12, a local community group put on a workshop in the old Gala swimming baths (Now demolished) behind west Bromwich town hall. Pato Banton from Peter Andre’s Mysterious Girl of all people was the guy teaching us, most surreal. I did that course for 6 weeks and took myself to under 18s nights around the local area and begged people to give me chance, eventually a little pub called busby’s gave me a go on a Tuesday evening kids night. I met a guy who was into niche and he dragged me to place near merry hill called millennium where his cousin ran a night and demanded I played for them, after a few nights they gave me a residency on their under 18 nights. I played here for 2 years before landing and opening slot at Atlantis in Wolverhampton on a Thursday night. It was around this time that I found trance, immediately I shot to HMV and bought Dave Pearce trance anthems and while sat on a coach on a school trip to wales as the coach winded up the single-track road on a glorious sunny day that cd blew my mind. I have never looked back since. 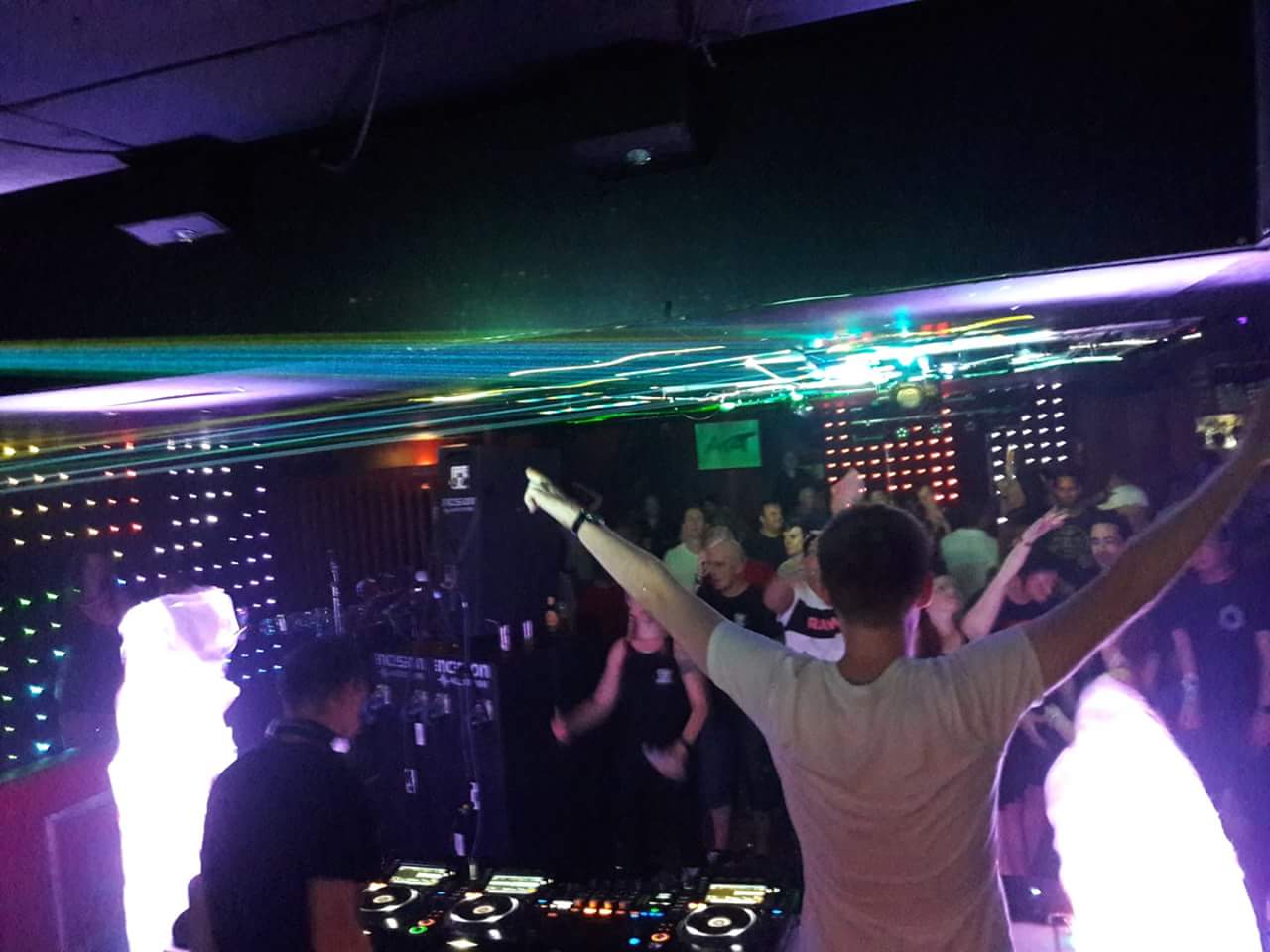 Has trance always been your sound?
No, I first started out playing house & garage, speed garage, DnB, 4×4 and hardcore. It’s a bit of a mental mash up I know.
A lot of artists that we speak to believe that producing tracks is now integral to getting gigs… firstly do you think that is true , secondly have you produced and if not, are you planning to?
Ohhhh good question, no is what I would like to say but yes is what I should say. I don’t think there is a way to answer this 100% there are DJs out there that play that don’t produce. But if you want to get big gigs I feel its exclusively open to producers.

Its all down to the promoter at the end of the day!

I have only recently started to dip my toe into producing along with a talented chap called Paul Why. We’re only still in our infancy and learning all the time but its great fun. Were working on some original material now that with any luck you will hear in clubs soon. 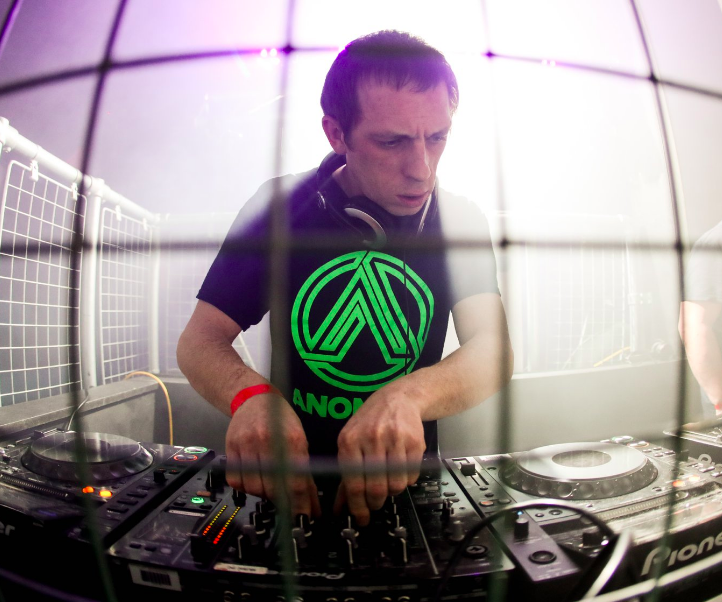 Fashions in dance music can change like the wind, especially in recent years..  we’ve seen the rise and fall of many different sounds… where do you see trance right now?

I think trance is over towards the industrial side at the moment, I think the increase in warehouse style events and the introduction of labels targeting the harder end of the genre WAO138 for example have pushed it that way, plus the loss of so many great clubs where the more uplifting and eclectic underground sounds were played has made its mark too. However, the last 18 months I personally have noticed a bit of a shift and I’m very excited about what’s to come.

Well there in no denying the production levels of events have increased dramatically look at the shows like transmission, ASOT and others put on its mind blowing. I don’t think anything has gone downhill I think the scene has evolved and will continue to do so, but I think trance is trance it is what you make it, if you love it what’s bad about it?

All very serious questions eh!? let’s throw a curve ball… You’re invited to play a B2B with modern day Tiesto.. playing trap / EDM etc… would you do it? 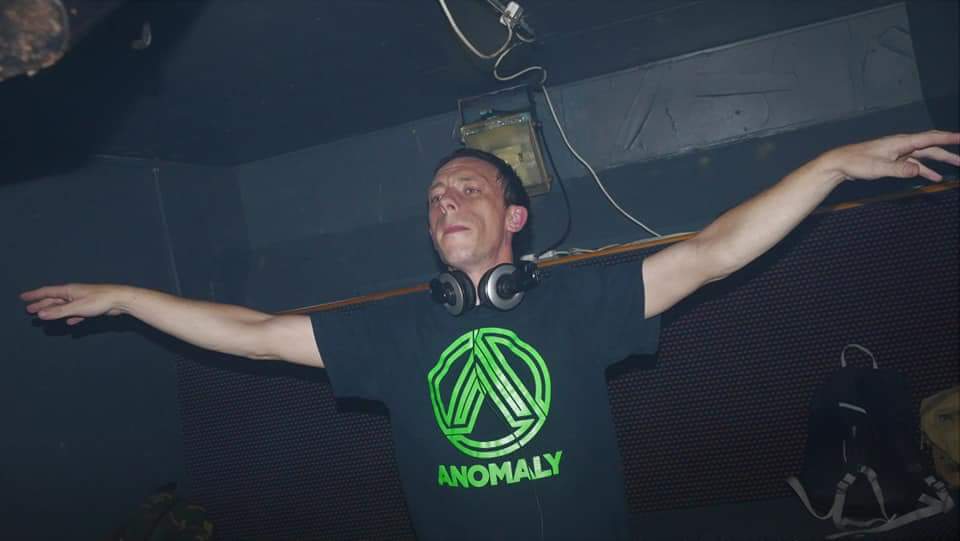 Back to business… You now front the hard dance/trance event, Anomaly… it’s no secret that OTS are huge fans.. tell us how that idea came to be and who was on your first line-up ..
It started as an idea to have a small night for mates (maybe 50 max) above a pub where we got to listen to what we wanted without having to travel the country. We originally planned on the name entity but there was a night in stoke with the same name so that’s where Anomaly came from. We popped the idea on Facebook to let people know and the interest was way bigger than we thought. Around the same time Trancecoda had moved to the Emporium in Coalville and Godskitchen announced the last dance and that they would be shutting up shop.  With nothing at all in Birmingham we made the bold choice to contact the rainbow venues and started to plan a bigger event.
We opened our doors for the first time in July 2016 with a local lad from Walsall Davey Asprey as the headline, AJ Gibson and Martin Ford of Godskitchen became our original residents and a pair of talented local chaps Mark Astley and Dom Harper rounded off the Trance room. In the hard room we had Carl Nicholson headline, Spectra & Scotty P, Adam Taylor, Richie G and Loopy.
The night was very well received, we got the bug for running nights really bad. Seeing people enjoy themselves and loosing themselves in the music is the most rewarding part to it all.

It’s no secret that getting these events going is a long and painful road… You recently had your biggest and most successful event to date with your second birthday celebrations.. tell us about the journey from event one to that one..

Its all been a bit mad to be honest, we’ve had some setbacks with venues but that pales an insignificance when compared to how the brand has grown, after the first event I think we went a little a nuts, we moved to a huge venue Amusement 13 which I have to say has my favourite sound system ever the crispness and clarity in there was amazing and bass that (quote from a close friend on the night) made your balls rattle. We booked Matt Darey, The Thrillseekers, Dan Stone, Rob Tissera, Ilogik, and Nick Rafferty.  That was hands down my favourite event so far. After that we have had 5 events and hosted a room at bounce factory. we go into each event with the same ethos.   What would we want if it were us paying. 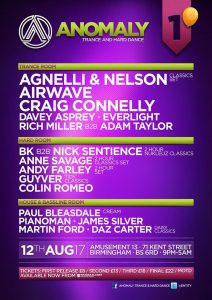 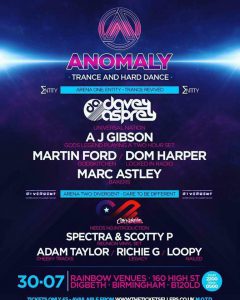 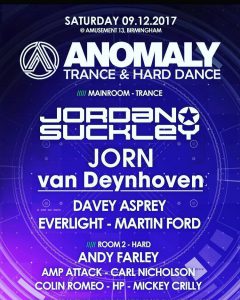 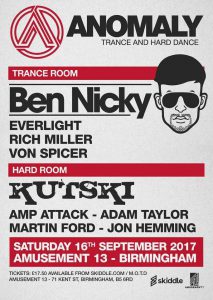 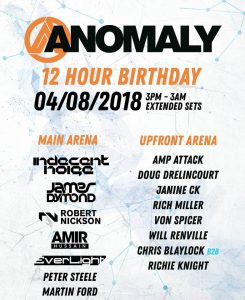 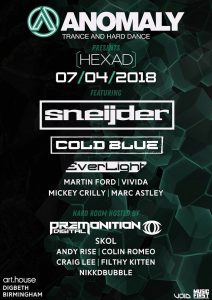 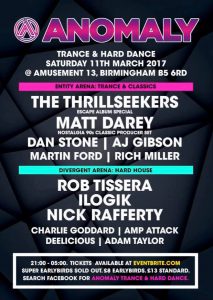 You’ve a huge event coming up on November 3rd featuring Craig Connelly, Shugz , James Cottle , Allen Watts and loads more .. what inspired that line up and what can we expect from it?
Again, the line-up is just who we wanted to see who’s impressed us in some way. You can expect an amazing atmosphere an awesome laser show and some amazing trance. 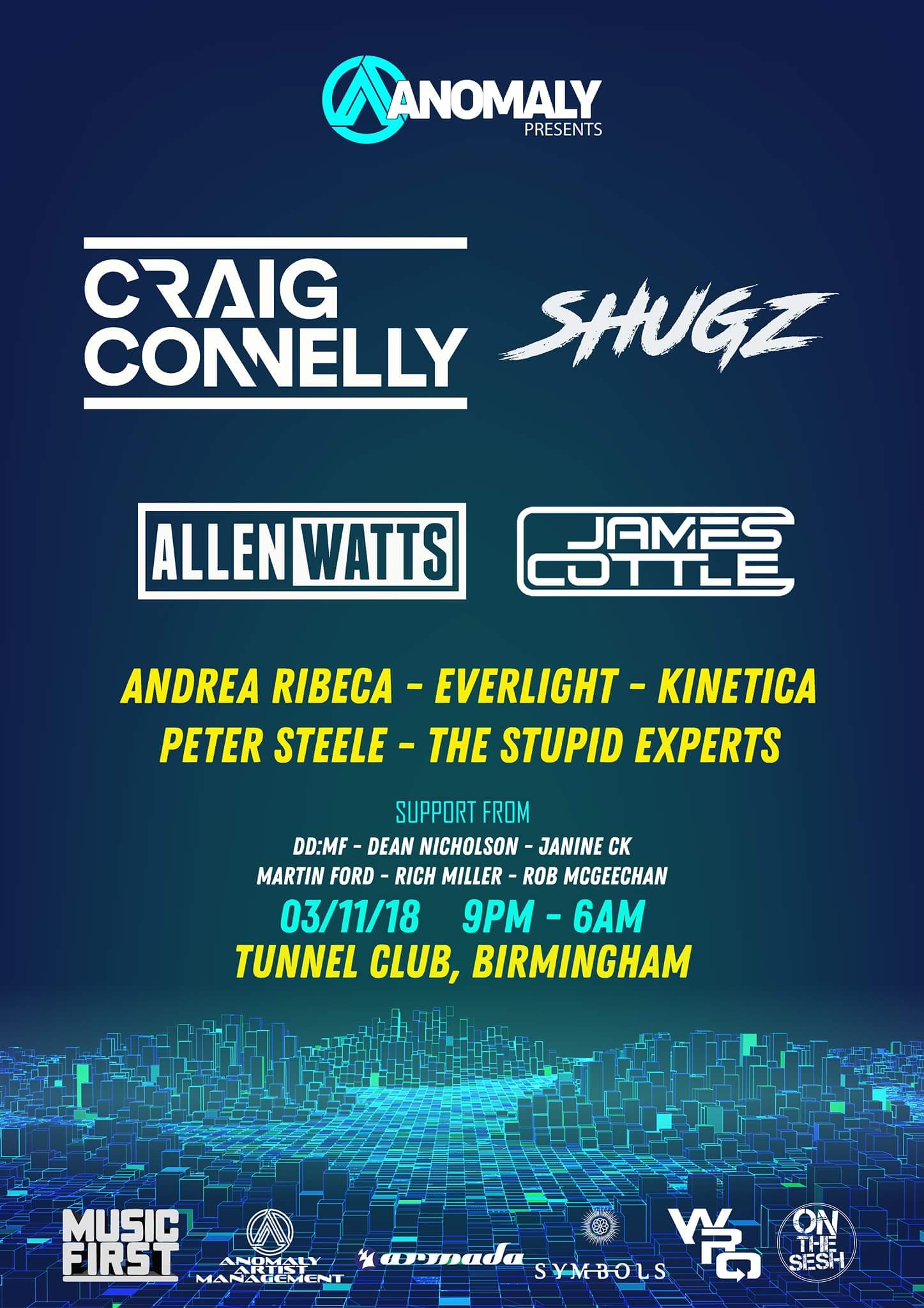 Politics aside, do you have  anyone that you’d love to have play at Anomaly in the future?
I would to get J00F b2b Christopher Lawrence that would be an amazing show.
Birmingham seems to be the epicentre of dance music at the moment, there’s events from all genres popping up everywhere.. why do you think that is ?
Birmingham has always been a trend setter, there is a huge underground scene here that is always changing and evolving I don’t think that will ever change
Have you any plans to take Anomaly outside of Birmingham ?
We have been looking at hosting the odd event around the UK in 2019 watch this space.
Final question on the subject .. what do you think has made Anomaly grow and grow into the brand it is today?
I don’t know I really don’t, maybe its just the music is getting more popular again, but I’d like to think its word of mouth from people who have visited us and had an amazing time. There has been a lot of hard work blood sweat tears arguments and sacrifice thrown in there too by me and Kate and the amazing team we have around us
OK.. now for some randoms… As a clubber, what is your favourite moment to date?
The Gallery arena Global Gathering 2003, I got in underage with a couple of older DJ pals, Christopher Lawrence blew my 16-year-old mind I stood there watching him in total awe but the whole thing was mind blowing, it was the first time I saw Lange, Armin, J00F, Marco V, Guy Ordanel, Push, Tiesto and Ferry Corsten. Ill never ever forget that night dancing in the rain.
What’s the weirdest thing you’ve seen on a night out?
I recently saw a guy doing a poo in the smoking area of a club!!
If money was no object and you could do one thing… what would it be?
Buy AIR and reopen her!!!!
Thanks Rich!
What a great insight into Rich and Anomaly!
Don’t forget OTS is working in partnership with Anomaly for their November 3rd night so watch this space for more exclusive content !
Links:
Buy tickets for Anomaly presents (Nov 3rd 2018)
Anomaly
Rich Miller Facebook