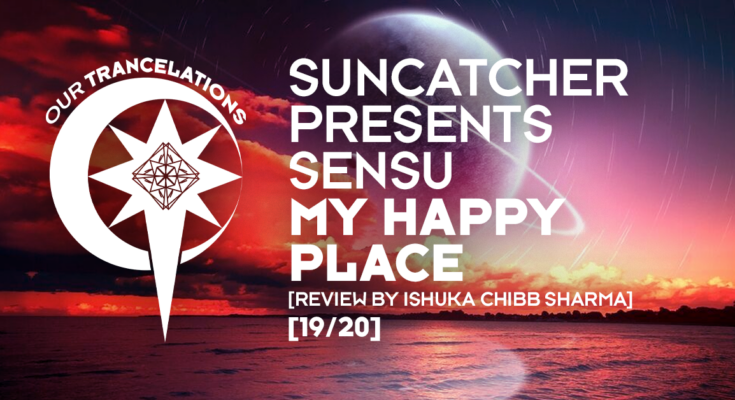 INTRODUCTION:
Another review, another story and another alias! We’re gonna talk about Bogdan Marian Cupcea aka Suncatcher 🇷🇴, the scene veteran that’s been around for almost 20 years. From releasing under labels like Fraction & Branded Digital to leading names like Enhanced in 2010, and eventually, its sub Always Alive. Additionally, he also took on FSOE, RNM, and Black Hole; to name a few. it’s to be mentioned that he has a side project w/ longtime collaborator Exolight 🇷🇴 called Sunlight State, that said, it isn’t always used for it’s meant for a slightly different vibe. For this review, he brought back his solo alias Sensu. It was formed in 2009 w/ an EP on Branded Digital. This year, he revived it w/ “Jumeirah”, included in Blue Soho’s 10th Anniversary Mix, and now w/ another impressive single. Let’s explore his happy place!


PRODUCTION:
The major key bassline with a punchy drum scheme bring a powerful & bright feeling as soon as it starts. It keeps progressing while the pads & rides seamlessly transition into a 1st climax, akin to its intro but with the pads generating the crux of the track: melody. What’s so special is that it sounds like him before 2017 and, to a certain extent, old-school Uplifting Trance. The piano surrounding the atmospheric pads complements the vibe. The breakdown begins with a breeze of those pads surrounded by angelic voices denoting happiness. The strings rise, the riffs pop up, the pads shine, and the bassline kicks back in, all during the end bit of the breakdown before the drums rollback. This intricacy leads to the main climax with tons of power both from energy & emotions. It’s interesting how at first it felt like the main climax appeared without a buildup & then the snare roll takes it forward, making it unpredictable & mysterious, a key element of oldschool trance.

CONCLUSION:
The return of Sensu is an earworm that shows how a simple melody can tell a whole story. Bogdan didn’t need any front-end sounds – like festival leads – thanks to his use of pads & background sounds. What a way to close 2020 for FSOE Fables! We can’t wait for what’s coming from Ferry Tayle & Dan Stone next year!