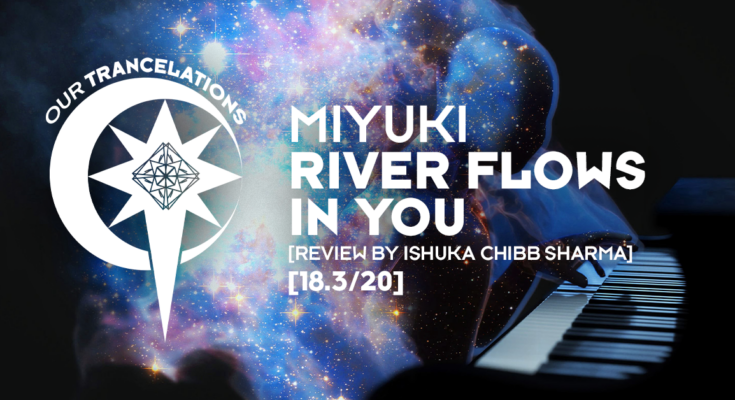 INTRODUCTION
Did you see that title? Indeed, it’s a new remake and a new talent we will look at. Known as “Doctor DJ” for her PhD in Molecular Oncology, MIYUKI 🇨🇦 had her musical start in 2017 with remixes and covers in a variety of genres. Relative to that date, she has amassed an impressive portfolio. It includes collabs with Glasscat on AVA which got top-tier support and reached Beatport #1. She is also a resident at Neon Owl and hosted her very own festival in Los Angeles! On top of that, she built a solid community on Twitch. For this latest release, she adds another entry to her covers & remixes, this time for the 2001 classical piano composition ‘River Flows In You’ by Yiruma 🇰🇷 🏴󠁧󠁢󠁥󠁮󠁧󠁿. The original is a lovely piece showcasing the power of love one can generate and is often used to depict sad emotions in certain situations. It is often confused with Bella’s Lullaby that featured in the movie Twilight. Facts aside, let’s see how this Trance edition turns out.

PRODUCTION
Since the beginning, the Techy spirit is alive and well thanks to sound effects and acid implementations on the bassline. The first climax is no short of energy thanks to a growling bassline. It is safe to say when the dirty beats pump, the crowd will surely jump! As that power supply goes on, we can hear the first few notes of Yiruma’s creation being merged with a Trancy soundscape of a flowing river. The breakdown emphasizes the original piece, in its original tempo, as it gets coated with strings. The result is a Trance symphony of melancholic yet glorious emotions! Then, despite the intentional vibes of remorse, the supersaws kick in to signal a mood swing. That twist brings joy to the melodies while retaining the same level of emotions by using the piano as a filler. This is solid proof of how Trance can help you recover from tough times…

CONCLUSION
We love the Tech climax even more than the Uplifting one, it brings a groovy temptation to the original. This release also reminds us of her recent piano stream! And for the live side, she is returning with another gig in 🇺🇸 so stay tuned!