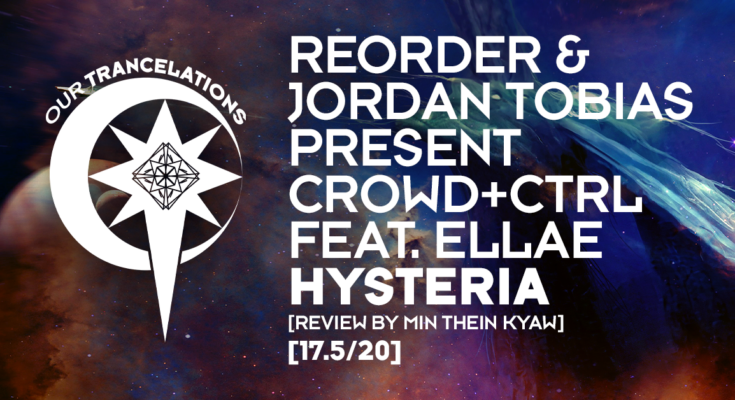 INTRODUCTION
It’s time to go deeper and darker as we feature this exciting project named Crowd+Ctrl. The duo of 🇸🇰 legend ReOrder and 🇦🇺 talent Jordan is back with another record on Armada Captivating, Hysteria with Ellae 🇦🇺! Though the name of the project gives an impression of Tech or Psy Trance, its genre is actually towards the deeper side of Progressive! It was started last year following multiple Uplifting collaborations between the two. Like ReOrder, Jordan released solo originals on big labels like Black Hole, AVA, Suanda, Subculture, and Silent Shore. As for Ellae, she is not only ‌a vocalist but also a multi-talented songwriter, producer, and sound engineer. She released collaborations on Distrokid, Adept Records, and Mango Alley. This latest one, Hysteria, was premiered live in ReOrder pres. RRDR set at ASOT 1000 Poland. Since then, we decided to probe this intriguing tune

PRODUCTION
Dark grooves and melodies blend in perfectly with the title “Hysteria”, letting the darkness come in through the windows faster than sunlight would. The percussions complement the nightly vibe as the haunting synths and horns drive the progression. When the electric shock happens, Ellae’s spooky vocals grab control as we are swept into the darkness. Hypnotic melodies and arps then enter the equation; the synergy with the wicked lyrics is remarkable! Fiery arps and drums bring out the feisty side of the track, adding to the blazing bassline so that the breakdown is even more potent. Finally, the climax features a cheeky play on vocals, synths, and effects that fit the theme. At this point, the only thing you can do is let the sound paint the corners of your mind.

CONCLUSION
As expected, the deep dark production fulfills the purpose of the title while the vocals provide the extra tinge left for goosebumps. If you’re interested in more, they have a RCRDSHP release on AVA as they remixed Brave by Somna & Melissa Lorretta, the drop context ends next week! Meanwhile, we will be hoping for an album from this project…