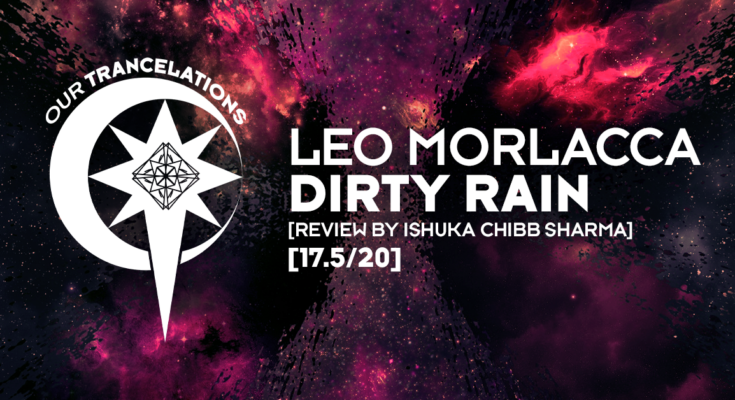 INTRODUCTION:
Over the past few months, we’ve noticed how Radiation Recordings became a hub for the great talents of tech, hard, & dark Trance. Indeed, we showcased last year the raw energy from Mike Crawley’s ‘God Is An Astronaut’, and today we’ll be looking at Leo Morlacca 🇦🇷. A fairly new talent in the scene, Leo is heavily influenced by his vinyl collection of old school music, particularly hard House, hard Trance, & classic Trance. He became a resident DJ at Trance Room where he shined like never before, opening for big acts while supporting his local community. Aside from that, he was an electric guitarist in a high school band. His musical background is interesting! This might be one of his first ever proper releases and the title is surely filthy, let’s find out why it’s called ‘Dirty Rain’.


PRODUCTION:
Leo invites ravers to the hard train, buzzing at a speed of 144bpm. The realm & atmosphere revolves around the acid, old school & warehouse vibes with the first climax having a powerful raw bassline backed by electrifying riffs. Did we not mention the usage of the electric guitar as a bassline filler? It also becomes more evident during the breakdown. You’re in for a rush when this dynamic utility of the guitar clashes with the alarming sounds, thundering FXs, analog synths, pumping drums, & the vox announcing the start of a race! In the main climax, you get a thick bassline with the guitar at the forefront, merging rock & hard Trance. It’s not over yet, a third climax grabs the essence of classic raves using harder kicks, extra acid & big riff. Overall, it’s amazing how every section has different dynamic fillers!

CONCLUSION:
It resembles a boss fight in a video game related to running or racing, Sonic Adventure DX for example! I love how Leo synchronized his inspirations & his electric guitar skills into one production, a great hard Trance tool to have in your sets. Speaking of which, Radiation is launching their Hard House sublabel ‘NRG’. Kudos to Mickey Marr & Liz Wigley for forming this sub & signing this beast of a tune by Leo!