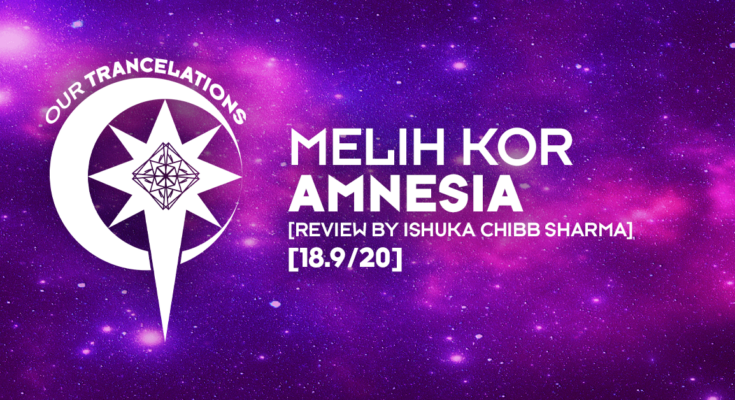 INTRODUCTION:
After club smashing “Taijitu” and deep “Eteru”, Melih Kor 🇩🇪 returns with the aptly named “Amnesia” to end the year that we all wish to forget. When he released “Eteru”, he also invested a lot of time in making some amazing visuals for his sets & music videos. He even played a live set during that time at Nuremberg, taking his melodic journey across another level. We’ve already said a lot about him in our previous reviews, so, without further ado, let’s talk about this latest chapter of his NON/DUAL journey.

PRODUCTION:
An interesting drum scheme backed up with liquid arpy sounds to start off. The main riff is catchy, progressive, & groovy. It’s well-polished from all directions especially as the first climax goes on. As the drums keep banging, the groove intensifies and the liquid atmosphere spikes, this is where the depth of the production is highlighted. The cinematic FXs & fillers bring us to the 2nd climax which is still very groovy, however, the atmosphere shifts from liquid to retro thanks to crispy sound choices & patterns. Approaching the breakdown, a small pause of the drums enriches the strings, yet again adding more depth which is later supported by soft plucks & claps to keep the beat going for the buildup. It leads to an exciting 3rd climax: super fresh approach to the sound of progressive house, multiple atmospheres, consistent groove, power-packed drums, & solid sound design; which reminds me of his remix of Three Drives’s Greece 2000 – the groove is strong with both of these!


CONCLUSION:
Melih takes on yet another theme – just like the previous two – in this case it’s groove & progression. From another perspective, the title is ironic because no one can forget how much depth & detail this track has, although Melih’s interpretation seems to be that if Amnesia was a song, it would have this kind of complexity & this many transitions. Needless to say, Melih is “one to watch”. As he keeps showcasing his creativity, we’re hopeful he can get more support.