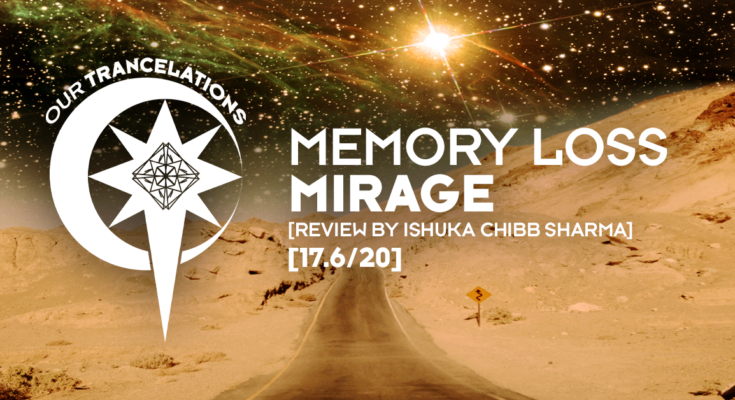 INTRODUCTION:
For this review, we’re taking yet another dive into the AVA imprint alongside another one of their roster artists: Memory Loss. The 🇨🇦 DJ/Producer with a massive discography had ventured into Hard Dance under “DJ Audy” before settling in Trance. Between 2010 & 2013, she had her own label “Tech Fu Recordings” that hosted her “DJ Audy” tracks, there was also a massive side project with Rodi Style (Somna’s hard dance alias) + Tongue & Groove called Kung Fu Crew aka KFC. The switch to Trance came mainly through the Uplifting side with releases on labels like AVA, In Trance We Trust, Flashover Trance, Universal Nation, Tangled Audio, Go On Air, Critical Fusion, Silent Shore, Fraction etc. While she’s still known for that sound, her latest record “Mirage” is progressive, let’s experience it!

PRODUCTION:
The clean & powerful intro progresses nicely with synths & chorus fillers. The synth pattern & arrangement during the buildup is rather dark & mystic compared to her brighter stuff as of late. Then comes the first climax surrounded by a lot of drums layered with a simple bassline to keep the intended vibe & energy flowing. It feels like an upgrade to the intro with an extra pinch of an arpy lead that could possibly define the main melody. That continues in the breakdown, however, the lead sound morphs into something more festival-oriented. Indeed, the festival aspect comes to the foreground in the second climax, and the brilliant progression is evident here as well. As for the title “Mirage”, it is conveyed by the hypnotic atmosphere from the main melody.


CONCLUSION:
Mirage overall is a slower darker side of her productions when compared to her other progressive tracks like Savannah or The Lost One, so it fits on the main catalog of AVA. It’s nice how she’s conquering this unexplored territory in her sound, this is something we really like & hope to see more from her and others.